An old favourite, with renewed interest!

I've been a fan of the Battletech universe since my brother bought me a second hand copy of the second book in the Blood of Kerensky trilogy in my early teens.

I read that book over and over again, never knowing the start of the story or the end but being completely enthralled regardless.  As time went on, Mechwarrior 2: Mercenaries and Mechcommander on the PC expanded my love for the universe, followed by the sequels to both games.

My early miniature gaming was primarily Warhammer 40k & Fantasy, I had no real interest in Battletech as a miniature game when I was younger but that changed with the release of Mechwarrior: Dark Age by Wizkids in my early 20's.  I know a lot of Classic Battletech (as it has been known since) players didn't like the direction Wizkids took the game - it was completely different from the game they played and loved, the fiction had been given a time jump, new characters replaced old favourites and generally left a bad taste in their mouths.

Personally, I loved it.  I had a great group of people to game with, I was invested in the new lore just as much as the old and it was just fantastic to get so involved with the universe in a way I hadn't before.

Were there things I didn't like? Yes of course.  Blind boosters were annoying but almost everything was at least usable.  Some game balance issues were clearly evident especially in those first few waves of releases - Fire for Effect introduced artillery and that threw people for a right spin.  There were some really strange interactions that could be used that made no sense in real life but worked too well in game.

For all its faults, I still loved MW:DA and I do still play from time to time, just for a nostalgia kick!

Move on some number of years since MW:DA was cancelled, I got the urge to look into Battletech again, picking up some mechs from Ral Partha Europe and throwing a bit of paint on them with no real intention of getting into Classic Battletech with any serious thought, just maybe play the odd game or two.

Enter Alpha Strike.  I'd seen mention of this on the Battletech forums and had absolutely no idea what this was, so after a bit of digging about for information it appeared to be exactly what I was after - a quick, easy to play version of Battletech.

I timed it really well, with the release of the "A Game of Armoured Combat" and the Introductory boxed sets, plastic rather than metal mechs (I've never liked metal minis) I was hooked.  Picked up the Alpha Strike pdf, found resources such as the Master Unit List and I'm all on board.

I've played a few test games so far, and with the release of the Clan Invasion boxed set and some expansions have a nice little force being built up now.

So far, most of the mechs I've painted are from MW:DA factions - it's the era I first gamed in, and the one that I'm most invested in.

So my first set of mechs from the Introductory & AGoAC box sets have mostly been painted in Swordsworn colours: 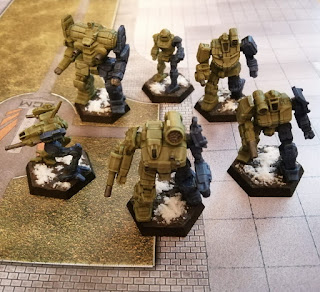 I choose to go for the lighter green seen on the Swordsworn Thor that was in MW:DA (Gary Metcalfe I think was the unit in question) purely because I just wanted them to be my own take on them rather than the much darker green used in the MW:DA game.  I'm happy with them and it's a nice mix of units that I can form a few different types of lance from as well.
Next up, I wanted to attempt some camouflage mechs, to be used as a planetary militia: 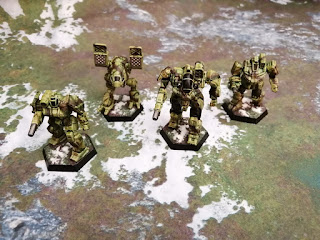 The Wolverine shown below was the test mini for the scheme: 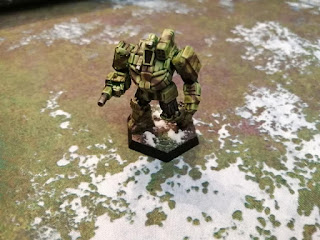 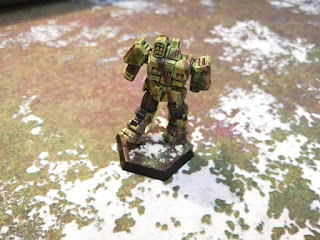 Again, I'm quite happy with the way they've turned out and I can easily use them to augment the Swordsworn unit above, or act as third force if required.
Lastly for now, my Clan based mechs, this time fro the Steel Wolves faction from MW:DA: 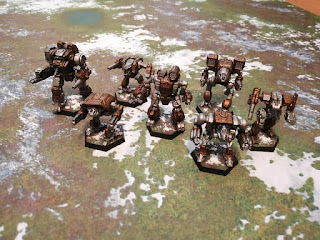 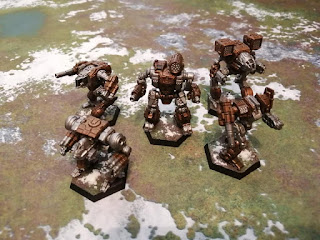 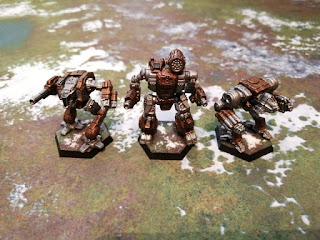 I wanted these to have a more metallic look than the original Steel Wolves, so replaced the usual matt brown with a contrast paint (Gore Grunta Fur) over a Leadbelcher base.  Again I'm pretty happy with the way it turned out, and the mechs have a nice overall theme which looks like they're part of the same unit without being identical.  I'm particularly happy with the Thor in the centre of the last picture, reversing the colour scheme will help signify it as the Star's lead mech in games.
Next up will be my Dragon's Fury mechs, but I'm going to get a couple of games in with the above first as I've not actually used them yet.
Hopefully, I'll be posting a bit more content again, between Battletech and the newly released Star Trek Attack Wing Alliance: Dominion War Campaign, I can get back into the swing of things!
Anyway, until next time!
Posted by The id at 11:02