My camera isn't exactly liking the red and has somehow lost a bit of depth in the grey as well but you can get the general idea - I'll try and work out some better lighting next time...

Firstly, a group shot of the force, can be used to mix and match two lances: 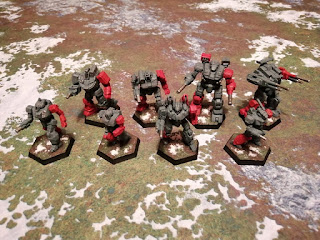 So, in the pic above, back row: Wolverine, Griffin, Warhammer, Rifleman; Front row: Valkyrie, Wasp, Phoenix Hawk & lastly a Stinger.
After painting them up, have to say that I'm really happy with the way they look as a unit, I had originally planned to just have the left arm red and the rest grey but it did look a little bland to be honest, hence the addition of the red on the right lower legs.
A closer shot of the Warhammer: 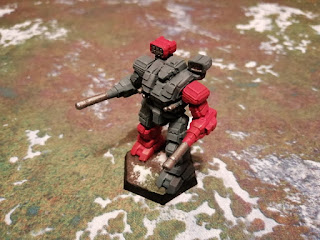 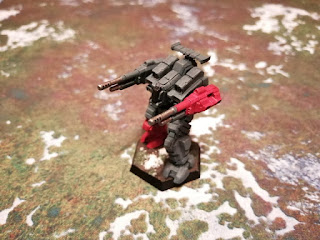 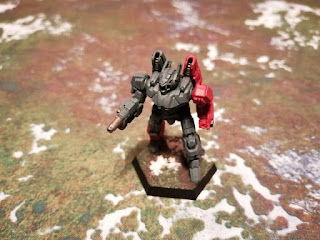 As per usual I've seen a few spots I need to clean up on the paint jobs after taking pictures of them so I'll go back and tidy them up at some point.  The cockpit colour will probably end up being a jewelled blue (dark through to light) but I'm so out of practice at the moment I'm keeping that until my confidence is back up a bit.
With all that being said, I now have the decent sized forces for Alpha Strike, all from the Dark Age/Republic era: Swordsworn, Steel Wolves & now Dragon's Fury.
In addition to the above, I have the camo lance which can act as a planetary force so can drop into any of the above as needed.
On to some games next I think!
Posted by The id at 15:12