Hi all, just a quick update regarding the state of the game - there have been no official OP events in my local store for some time, so instead we've been playing games with a random mission generator that I've come up with - basically you get one main objective and one secondary each one allocating you a number of victory points.

So, just running though some action shots from one of last years most memorable games (and I'm sorry I've been mega quiet, just had no time to update anything):

The Klingons had the "Move the asteroid off the board" condition, in which they can spend an action to tractor beam an asteroid towards the edge of the board, if they get it off before it reaches the far side they get the points.

The Federation had "Kill the opposing flagship", in which they must destroy the most expensive ship from each fleet.

The Xindi ended up with "Research raid", so attack the planet (which is shielded) then spend an action to transport a research token onto their ships.

The secondary objectives were two "Turnabout Intruders", which are an objective that can be moved a random speed (D6) in any straight line by whichever player rolls the highest, then at the beginning of the attack phase, they attack each ship with 3 red dice, no mods - if it kills a ship on a turn you moved it, you gain points for the kill.

The last one is "Countdown to extinction", so essentially, from turn 6 onwards each ship rolls a red die and takes any damage from it - last ship standing gains the points.

I'm just going to throw the pics down and you can see the chaos! 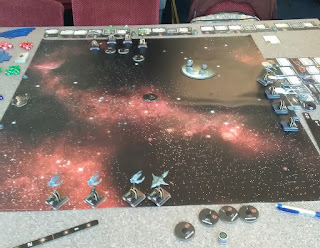 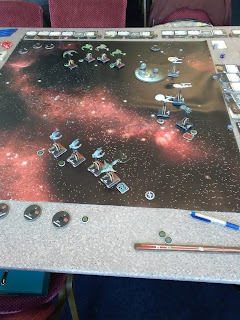 Federation fleet getting stuck in: 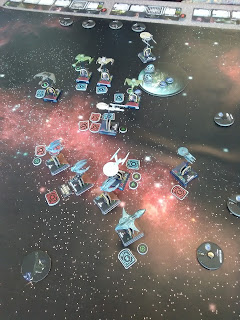 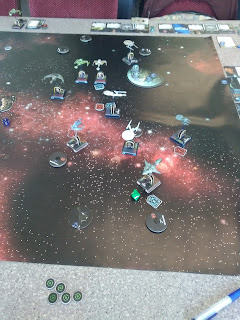 A turn later and the Intruders and the Xindi wreak havoc: 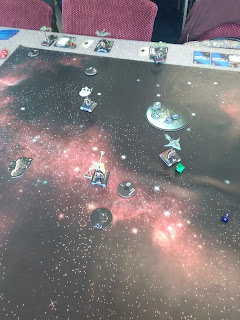 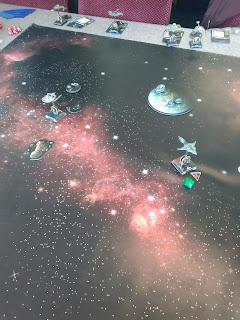 Both ships reduced to one hull left, playing the time game: 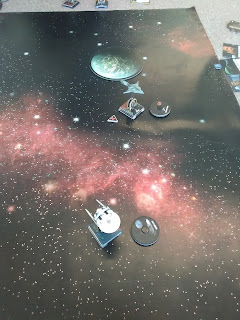 First turn of the "Countdown to extinction" and both ships suffer damage which destroys them both! 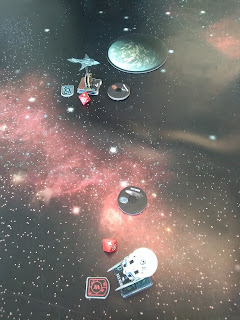 Overall, an excellent game, chaotic and brutal - just how we like it!

Next up, X-Wing games!